Senate Majority Leader Mitch McConnell said Tuesday that the Democrat-led impeachment effort against President Donald Trump diverted congressional attention away from all other matters, including the unfolding coronavirus pandemic.
Radio talk show host Hugh Hewitt noted during an interview with McConnell that GOP Sen. Tom Cotton of Arkansas was the first to sound the alarm in mid-January regarding reports coming out of China about the novel coronavirus.
“He was first, and I think Tom was right on the mark,” McConnell responded, “And it came up while we were tied down on the impeachment trial. And I think it diverted the attention of the government, because everything, every day, was all about impeachment. But Tom figured this out early, and he was absolutely right.”
Politico reported on Monday that it was just hours before the beginning of Trump’s impeachment trial on Jan. 21 that Cotton — a U.S. Army combat veteran who now serves on Senate Intelligence Committee — began to worry.
That was the same day the first coronavirus case was detected in the United States, according to a CNN timeline.
“So [Cotton] started badgering the White House to bar travel from China immediately. Cotton called the president, his son-in-law Jared Kushner, Health and Human Services Secretary Alex Azar and other top officials, warning about the dangers of the virus and pressing them to ground flights,” Politico reported.
Trump made the then-controversial decision to ban flights coming out of China into the U.S. on Jan. 31, making the U.S. one of the first nations to do so.
That same week, the president established a coronavirus task force to monitor the unfolding public health situation.
Even as the news coming out of China worsened, House Speaker Nancy Pelosi and Senate Minority Leader Chuck Schumer were pushing for additional witnesses and documents to be included in the impeachment trial, which would have resulted in the proceedings continuing for weeks or perhaps months.
On Jan. 31, the GOP-led Senate voted against additional witnesses being introduced and ultimately acquitted Trump on Feb. 5.
McConnell expressed pride in the Senate to pivot from the partisan-charged days of impeachment to come together and unanimously pass a $2.2 trillion coronavirus aid package, despite a last-minute intervention by Pelosi that nearly scuttled a deal Senate Republicans and Democrats had reached.
The speaker had called for so-called “Green New Deal” initiatives, measures to benefit labor unions, and changes to voting laws to be included in the legislation, which McConnell and other Republicans hammered as having nothing to do with the coronavirus outbreak.
“This was a genuine national emergency,” McConnell told Hewitt Tuesday. “And trying to put together a $2 trillion dollar bill in a week was really a herculean task, as you can imagine.
“The way I thought it would work best would be for those of us in the Senate to try to get started on a bipartisan basis, and we were doing really quite well, as you may recall, until the speaker of the House decided to insert herself into the process, which created a couple of days of unnecessary partisan sniping. But we got past that.”
On Sunday, Pelosi accused Trump of not working urgently enough to address the coronavirus pandemic.
“We should be taking every precaution. What the president, his denial at the beginning, was deadly,” Pelosi told host Jake Tapper on CNN’s “State of the Union.”
The speaker also referenced the question made famous during the 1973 Watergate impeachment hearings against then-President Richard Nixon: “What did the president know and when did he know it?”
“I don’t know what the scientists said to him, when did this president know about this, and what did he know? What did he know and when did he know it? That’s for an after-action review,” Pelosi said.
“But as the president fiddles, people are dying. And we just have to take every precaution,” she added.
Pelosi asked the same question on MSNBC’s “Morning Joe” on Tuesday, wondering what and when scientists were advising Trump about COVID-19.
Republican Party national spokeswoman Elizabeth Harrington responded to Pelosi’s interview, tweeting, “Democrats are so impeachment obsessed, Pelosi is trying to turn a virus from Wuhan into Watergate.
“‘What did he know & when did he know it?’ Is she talking about Xi? POTUS mobilized CDC, created task force, and stopped travel, while Dems wasted our time on a Ukraine witch hunt.”

Elizabeth Harrington ✔@LizRNC
Democrats are so impeachment obsessed, Pelosi is trying to turn a virus from Wuhan into Watergate 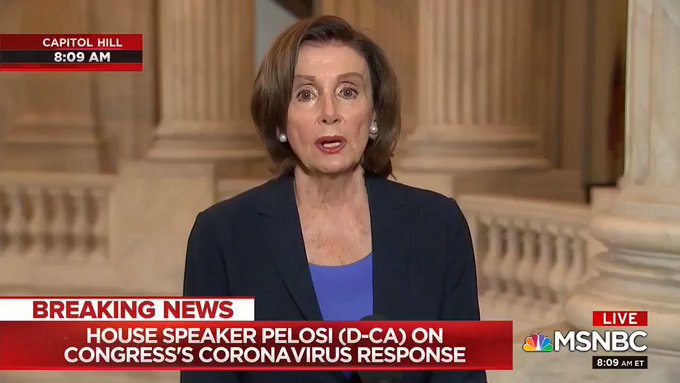 1,604 people are talking about this
Following Pelosi’s Sunday CNN interview, Trump called her a “sick puppy” and a “disgrace,” in response to her claim his administration is costing people’s lives.
However, the president wasn’t as critical of Pelosi’s MSNBC interview, writing in a Twitter post:
“I watched a portion of low rated (very) Morning Psycho (Joe) this Morning in order to see what Nancy Pelosi had to say, & what moves she was planning to further hurt our Country.”

Donald J. Trump ✔@realDonaldTrump
I watched a portion of low rated (very) Morning Psycho (Joe) this Morning in order to see what Nancy Pelosi had to say, & what moves she was planning to further hurt our Country. Actually, other than her usual complaining that I’m a terrible person, she wasn’t bad. Still praying!
145K
6:48 PM - Mar 31, 2020
Twitter Ads info and privacy

60K people are talking about this


“Actually, other than her usual complaining that I’m a terrible person, she wasn’t bad. Still praying!” he added.
Posted by Refreshing News at 03:45