‘Cleanup In Aisle 3!’: Horrifying Scene Shows What Is Going On In Pelosi’s District 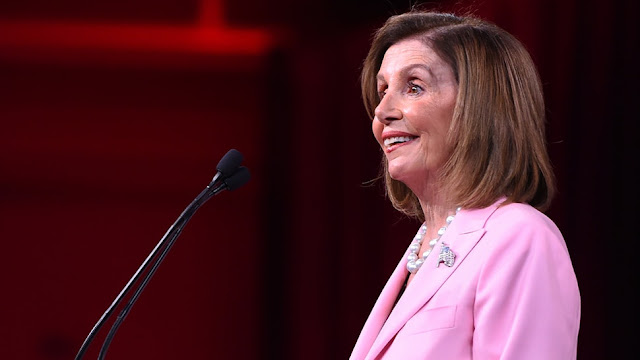 A disturbing scene unfolded in San Francisco over the weekend as numerous people posted on social media about a man who walked into a Safeway grocery store and defecated in the middle of store.
The incident reportedly happened at a Safeway in northern San Francisco, inside House Speaker Nancy Pelosi’s district, with a store employee telling that the incident happened on Sunday.
The employee, who did not wish to be named, said that when they arrived at work today that other employees were talking about the incident from yesterday, which the employee said was the first time that it happened inside the store.
The employee said that public defecation has become such a problem in San Francisco that people in the area love when it rains because it cleans off the sidewalks and the streets.
Journalist Deborah Kan tweeted out a photo of the incident and wrote in a tweet to the Mayor of San Francisco: “. @LondonBreed here’s a pic of a man on drugs taking a poo in aisle 10 of @Safeway Marina Sunday morning in #SF. Why is this okay?”

.@LondonBreed here’s a pic of a man on drugs taking a poo in aisle 10 of @Safeway Marina Sunday morning in #SF. Why is this okay? @KTVU @kpix @kron @KGOdesk @sfchronicle 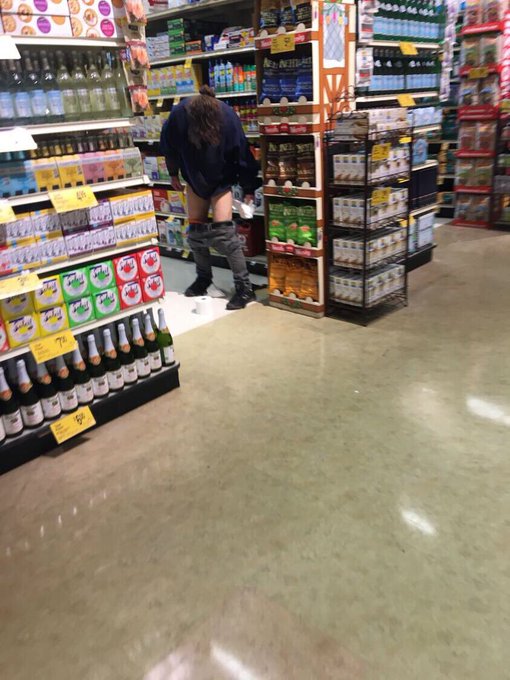 3,767 people are talking about this
Congressional candidate John Dennis, who is running for Pelosi’s seat as a Republican, wrote in a tweet: “Cleanup in Aisle 3! Thank you Nancy Pelosi. I publicly warned in 2018 that if we let people violate our streets the homeless problem would get worse. The answer: Arrest, then offer a choice. Jail or rehab. Just got this photo. A homeless man defecating in our local Safeway.”

I publicly warned in 2018 that if we let people violate our streets the homeless problem would get worse.

The answer: Arrest, then offer a choice. Jail or rehab.

Just got this photo. A homeless man defecating in our local Safeway. 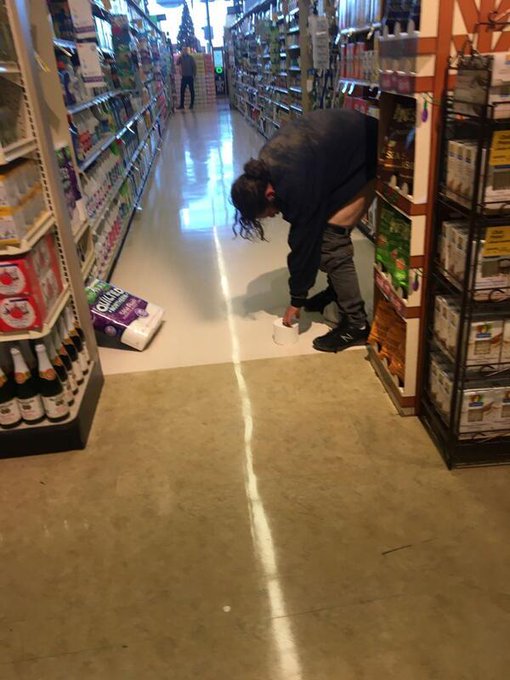 584 people are talking about this

“Between 2011 and 2018, San Francisco experienced a massive increase in reported incidents of human feces found on public streets,” SFGate reported. “In 2011, just over 5,500 reports were logged by the San Francisco Department of Public Works; in 2018, the number increased to more than 28,000.”
The report says that the numbers are most likely much higher than what the statistics show because the statistics are based only on reported incidents.

OpenTheBooks@open_the_books
Lately there has been a brownout in the Bay Area... Since 2011, there have been at least 118,352 reported instances of human fecal matter on city streets. @ForbesOpinion http://bit.ly/2v98r1V 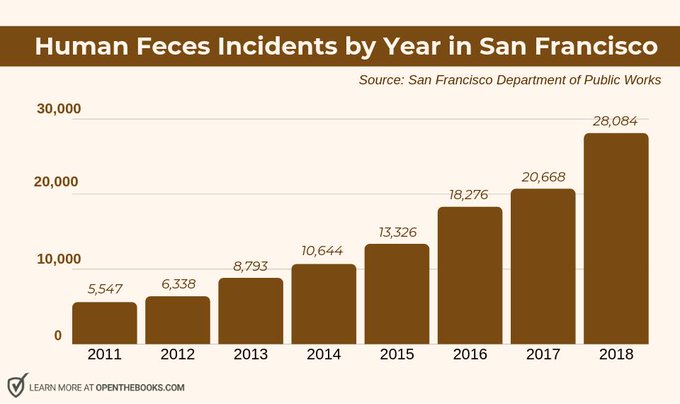 116 people are talking about this
The problem is so bad now that San Francisco now employs a “Poop Patrol” to deal with the issue. Business Insider reported in August:

In San Francisco, people call the city’s telephone hotline about 65 times a day to report piles of human feces on streets and sidewalks. …
… Starting next month, a team of five employees from the Department of Public Works will take to the streets of San Francisco’s grittiest neighborhood, the Tenderloin, in a vehicle equipped with a steam cleaner. They will ride around the alleys to clean piles of poop before citizens have a chance to complain about them …

San Franciso Mayor London Breed said in a recent interview: “I will say there is more feces on the sidewalks than I’ve ever seen growing up here. That is a huge problem, and we are not just talking about from dogs — we’re talking about from humans.”
“I don’t think that the city is poorly spending what it already has,” Breed added. “I spend a lot of time on Fillmore Street. I see the people who are part of a program, out there power washing. They’re out there doing what they can to keep the community clean, almost every day, and then right after they leave, maybe an hour or two later, the place is filled with trash again.”
Posted by Refreshing News at 07:48