President Donald Trump whipped out a Sharpie and signed his name to his signature border wall on the Mexican border, after talking at length about its design and security features on a trip to the southern border.
On yet another trip to the border, Trump spoke about the design, height, and concrete-pouring procedure for the wall, which he called for in his campaign and is pushing before his reelection.
When he was done, a female construction worker told him: 'Mr. President, there's a tradition here on the border that anyone who works on the wall signs the wall for us.'
'Sing it? I'll sign it. Let's go,' Trump responded without a beat. Soon, he was holding a Sharpie – a pen that became infamous when he was revealed to have expanded the uncertainty cone for Hurricane Dorian in the Oval Office – and put his name to the wall that is so closely linked to his immigration policy and perhaps his reelection. 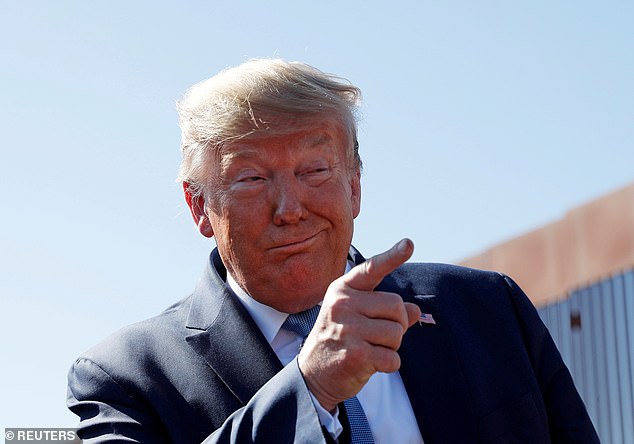 Someone off camera during the photo-op then yelled: 'Sir how about the secretary and the commissioner? Have them sign too They've got to buy in here,' in reference to two homeland security officials who accompanied him.
Trump's signature was visible on the rust-colored wall – an apparent compromise form the black color Trump favored to retain heat and therefore deter climbers.
'The general feels that we're better off letting it be a natural rust,' Trump said, referencing Gen. Todd Thurston Semonite commanding general of the Army Corps of Engineers.
'Letting it be the way it is. We'll make a determination as to painting it later. This will be a good strong rust color and we'll see,' the president said.
'It's not a big deal,' he continued. 'The black attracts more heat even than this color, but this is your natural seal.' 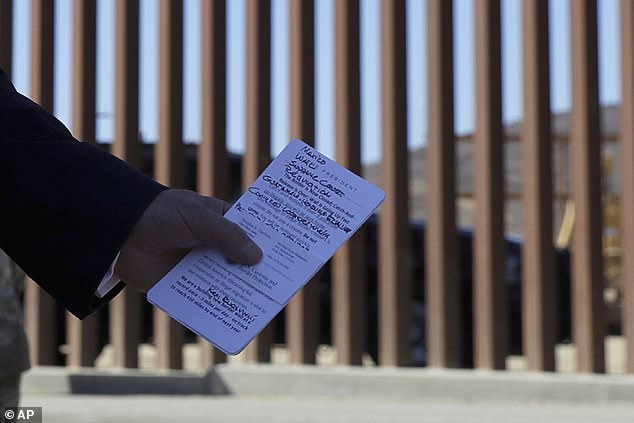 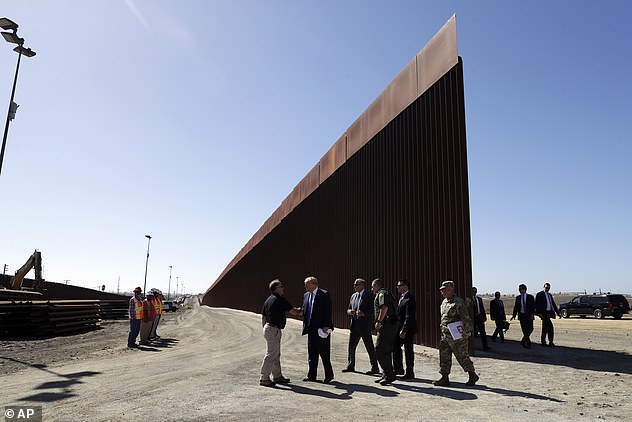 +6
President Donald Trump tours a section of the southern border wall, Wednesday, Sept. 18, 2019, in Otay Mesa, Calif.
The president's notes for the event, captured with a long lens, listed 'Mexico' as his top talking point. The second line appeared to say 'WAL' in all capital letters, presumably meaning 'wall.'
Trump said the wall would be 'impenetrable,' although Homeland Secretary Secretary Kevin McAleenan indicated some Mexicans were still slipping through even during construction.
'Instead of 300 to 500 (border crossers) a day we're now seeing 30 to 50,' McAllenan said.
Trump jumped in: 'And the only way you get the 50 is they walk around the areas like this ... Nobody's going over the wall. But where we are still building it that's where we get the 50.' 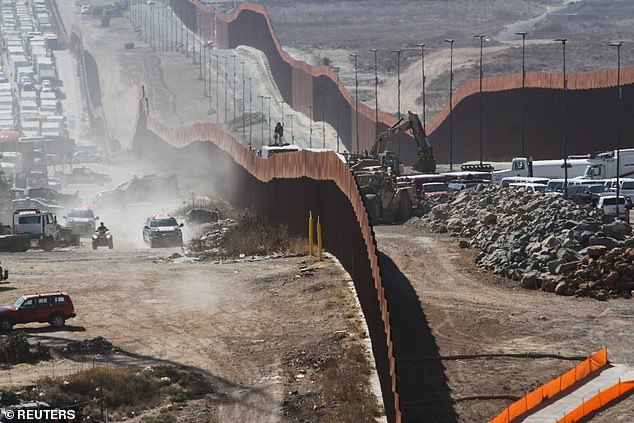 +6
A general view shows Mexican security forces (L) keeping watch at the border fence between Mexico and the United States, ahead of the visit of U.S. President Donald Trump to a section of the border wall in Otay Mesa, California, as pictured from Tijuana, Mexico September 18, 2019 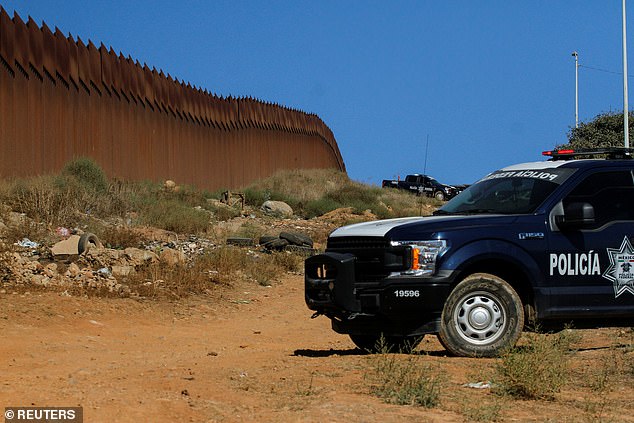 The double wall is replacing an existing eight-foot wall Trump described as weak and decrepit.
He said tubular steel bollards are filled with concrete during the construction process.
'The reason we pour the concrete afterwards is because it's too heavy to life when the concrete's poured in. So we put it up and we pour the concrete, a lot of people don't see that and we pour the concrete afterwards. So you have the rebar, you have the steel and you have the concrete,' the president said, on a day when he named a new national security advisor and vowed to impose new sanctions on Iran.
'The concrete's poured after it's up. They pour it through funnels. And cover much of the territory of the bollard,' Trump said.
Trump visited the wall section in a bid to illustrate his commitment to crack down on illegal border crossings as he raises money in California for his re-election campaign.
The Republican president, who is on a three-day swing through the U.S. West that has included a rally in New Mexico and a number of fundraisers in California, also used his trip to criticize the homelessness problem in Los Angeles and San Francisco. 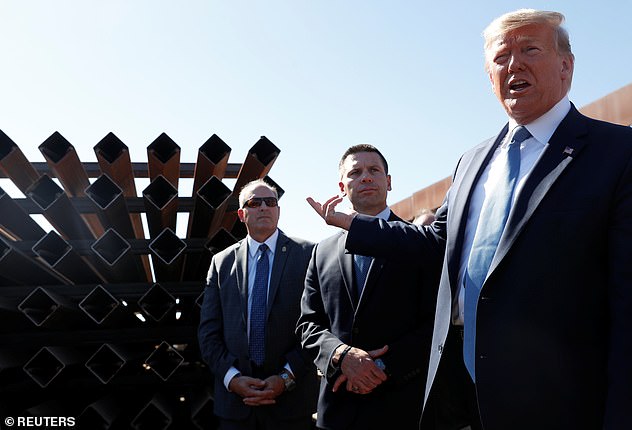 +6
Trump said he expects to have 500 miles built by next year
While deciding how to respond to an attack on oil infrastructure in Saudi Arabia and fresh from naming a new national security adviser, the president still had immigration at the top of his mind.
'We're going to show you a lot of wall. We're building a lot of wall,' he told reporters in Los Angeles before taking off for San Diego.
Trump's supporters are eager for the president to keep his promise to build a wall to stem migrant crossings through Mexico from Central America. Crowd chants of 'Build the Wall!' are often the loudest at his political rallies across the country.
In February, Trump declared a national emergency in order to divert funding toward wall construction when Congress refused to give him the amount he requested. As a candidate in 2016, Trump promised that Mexico would pay for the wall. It has refused to do so.
Trump has sought to assure supporters he is making good on his promise, but according to Politifact, his administration has not built new segments of a wall since he took office in 2017, although it has replaced some 60 miles (96 km) of existing border barriers with new fencing.
Democrats sharply criticize Trump's policies and do not believe a wall is the answer to the country's immigration challenges.
Trump is also collecting cash to bolster his campaign coffers as multiple Democratic presidential candidates ramp up their efforts to take him on in the November 2020 election.
The president's campaign and the Republican National Committee were expected to raise some $15 million at events during his western trip, according to an RNC official.
The RNC raised $23.5 million in August and $141.4 million for the 2019-2020 election cycle so far, and has $53.8 million in cash on hand, the official said.
Unlike his predecessor, Democratic President Barack Obama, Trump is not a frequent visitor to California, a heavily Democratic state that Trump lost by more than 4 million votes in 2016. He used his visit to criticize the state for its challenges dealing with a growing homeless population.
'We can´t let Los Angeles, San Francisco and numerous other cities destroy themselves by allowing what´s happening,' he told reporters on Air Force One on Tuesday, suggesting that the issue had dented those cities' reputations.
Big-city mayors in California have said the homelessness problem in the most-populous U.S. state should not be a partisan issue.
Posted by Refreshing News at 07:30