A commentator from the far left progressive "The Young Turks" group opined that the United States deserved the 9/11 attack and mocked the war injury of Rep. Dan Crenshaw (R-Texas.), and it's all on video.
Hasan Piker made the despicable comments on his Twitch video stream.
"America deserved 9/11, dude, f**k it! I'm saying it!"
Video of the comment was circulated on social media.

Piker tweeted about the 9/11 attack from his social media account, saying, "americas foreign policy decisions has lead to 911. this would've been a controversial thing to say in 2001. stop being a f**king idiot." 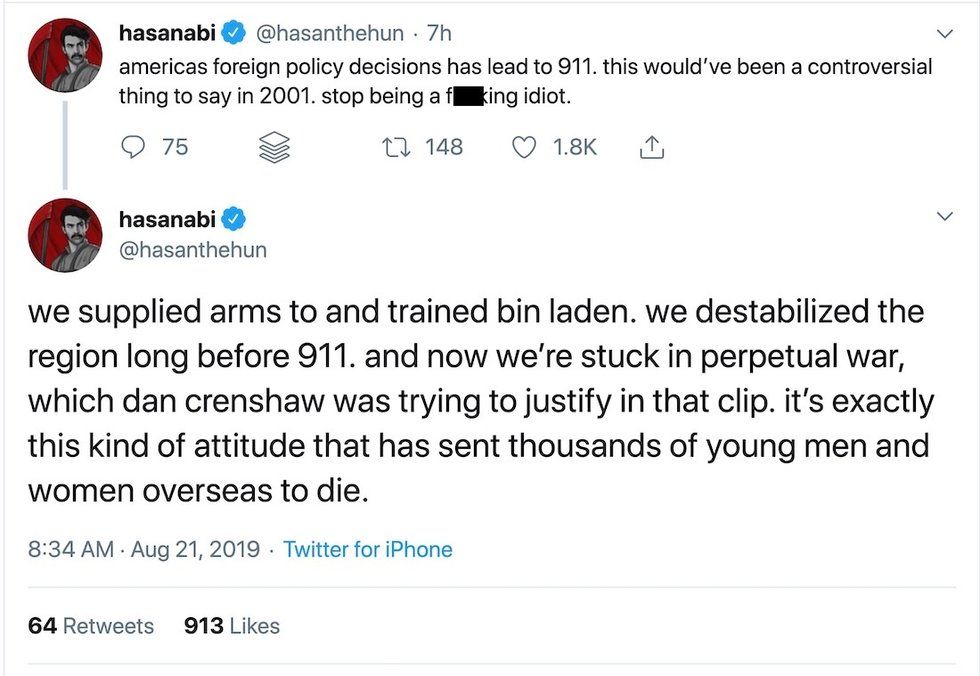 
A second tweet added, "we supplied arms to and trained bin laden. we destabilized the region long before 911. and now we're stuck in perpetual war, which dan crenshaw was trying to justify in that clip. it's exactly this kind of attitude that has sent thousands of young men and women overseas to die."
In another video circulating on social media, Piker mocked Texas Republican Dan Crenshaw's war injury.

Cenk's Nephew called the man who took @DanCrenshawTX's eye a "brave fucking soldier" This is what happens when you're gifted a job by your Uncle you know you didn't earn & it eats away at your mental state. pic.twitter.com/BohESrbvJ6
— Sean Fitzgerald (@IamSean90) August 21, 2019

The expletive-laden obscene rant mocked Crenshaw and praised the "brave f**king soldier" who injured him.
"This guy has the understanding of foreign policy of, like, a 12-year-old. What the f***. What the f*** is wrong with this dude!? Didn't he go to war and like literally lose his eye because some mujahideen — a brave f**king soldier — f***ed his eye hole with their d***?!" he yelled.
"Isn't that how he f***ing lost his dumba*** eye, because he got his f***ing eye hole f***ed, by a brave soldier?!" he exclaimed.
Piker had a Bernie Sanders campaign poster prominently displayed in the background of his Twitch video stream.
Posted by Refreshing News at 08:51