The world-famous physicist and cosmologist was the subject of the 2014 film 'The Theory Of Everything', which starred Eddie Redmayne and Felicity Jones. 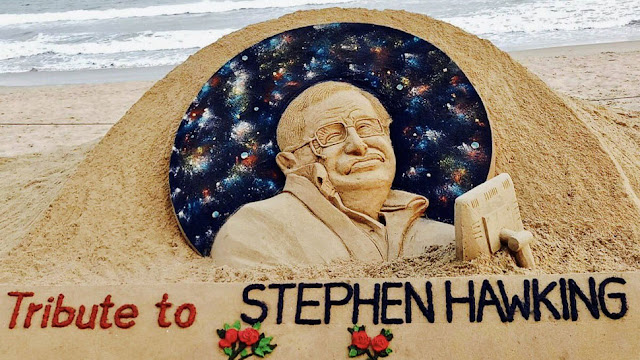 The world is mourning renowned British scientist Stephen Hawking's demise. The legendary physicist breathed his last at home in Cambridge on March 14 reportedly.

The 76-year-old inspirational physicist contracted motor neurone disease in 1963 and was given two years to live but he went on to study at Cambridge and became one of the most brilliant theoretical physicists since Albert Einstein.

Renowned Indian sand artist Sudarsan Pattnaik paid him a rich sand art tribute and shared the pictures on Twitter. He captioned the photos as: “Tribute to #StephenHawking, a renowned physicist and ambassador of science. My SandArt at Puri beach in Odisha.”

"He was a great scientist and an extraordinary man whose work and legacy will live on for many years. His courage and persistence with his brilliance and humour inspired people across the world," the statement said.

"He once said, 'It would not be much of a universe if it wasn't home to the people you love.' We will miss him forever," it said.

The world-famous physicist and cosmologist was the subject of the 2014 film 'The Theory Of Everything', which starred Eddie Redmayne and Felicity Jones.
Posted by Refreshing News at 19:46