A veteran was “heartbroken” to discover that the American flags he placed in his Texas yard for Memorial Day were ripped from their poles and stolen, according to KABB-TV in San Antonio. But then his neighbor showed him footage of the furry culprits.
Jennifer Northam, the daughter of the unnamed Air Force veteran, told KABB that her father was upset to discover that his flag memorial had been destroyed. 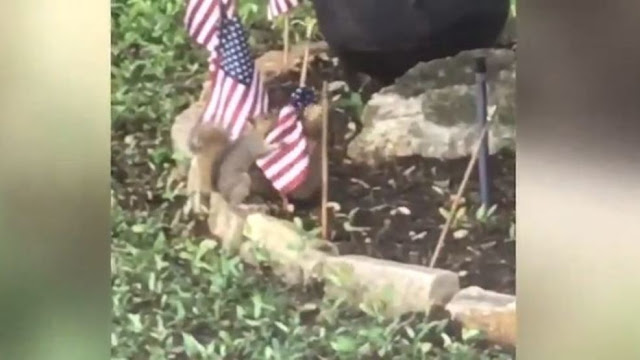 “It wasn’t like they had just fallen off,” Northam said. “Both of us were kind of heartbroken. We were just confused because we’re new to the neighborhood. We didn’t know if somebody did it or what happened.”
But their neighbor, Devin Rivera-Duque, told them that the culprits were not vandals, but a pair of squirrels.
“I saw [a squirrel] with the first flag,” Rivera-Duque told KABB. “I was just freaked out. The second and third flag, I just started recording her.”
Rivera-Duque recorded the squirrels methodically ripping the flags away and running off with them.
“I was just like, ‘Oh my god,’” Rivera-Duque said. “These animals have a mind of their own. Like, you never would guess that they would do something like that.”
Northam said it is “crazy that it was actually a squirrel that took it.”
“And they made a nest out of them,” she said.
Rivera-Duque showed KABB the squirrels’ nest in a nearby tree containing the 10 small American flags from Northam’s yard.
“It was like relief came over both of us,” Northam said. “Because we finally understood that it wasn’t someone. It was something. I mean, how amazing that they use their resources like that. They find something new, figured it would work and used it.”
Posted by Refreshing News at 00:35